One of our projects this week revolved around wheat. Did you know that all of the wheat flour we use in the restaurants comes from our own fields and mills? That’s right, the bread we bring to your table comes from homegrown wheat.

It wasn’t the case until just a few years ago, when we began exploring grains. We quickly became hooked on raising them, and over the past two years have dramatically expanded our grain program.

This week we created 7 experimental wheat plots within an acre-and-a-half patch of field that was supposed to have winter wheat, which we planted in the fall. The seed didn’t germinate, however, so we used the land for our latest experiment.

Each of the plots holds a different kind of wheat. One, called Chiddam Blanc de Mars, was originally developed in England, but the French went wild for it in the middle of the 19th century for baguettes. We like baguettes. We also love the names of some of our experimental varietals: Blue Beard Durum, Wit Wilkoring, India Jammu, Iraq Durum. You can see some of the bags of labeled seed in the photo above, along with a photo of us harvesting wheat last summer.

Our annual agricultural experiments normally involve things that fail, and things that thrive. Last year’s experiment, with Khorasan wheat (also called kamut) was a total triumph. We fell in love with Khorasan, an ancient grain that’s about 1,200 years old. This year we devoted three acres to the variety alone.

Eric Says Khorasan Is Health Food Without Tasting Like It

“We can make whole wheat bread that is just as soft and chewy and moist as white flour bread, but is packed with so much more nutrition,” says Eric. “It makes rich, wonderful breads, pastas and pastries, but at the same time it doesn’t taste like health food. I explain this to diners in the restaurant and they are incredulous that the bread they devoured at the table was whole wheat bread.”

We do anticipate selling Khorasan at the farmers’ market, but probably not until sometime in July, when we harvest the fields that are planted now. We are saving our Khorasan for the restaurant for the time being. But in the meantime do often offer other homegrown flours and grains at the Market now.

We have close to six acres of wheat planted this year, which should yield about six tons. That’s enough for our restaurants and the farmers’ market.

The fields right now are full of greens, as well as things that won’t bear fruit until later during the summer. The most bounteous crop right now? Arugula. We have a ridiculous amount of the green in the fields, and will be selling loads of it at the Market on Saturday.

This is prime-time for arugula — both April and October are the high seasons. Cooler temperatures preserve arugula’s sweetness, which is helpful; it’s a fairly spicy green. During the summer, the peppery notes become pronounced. But right now, the sweet balances everything. 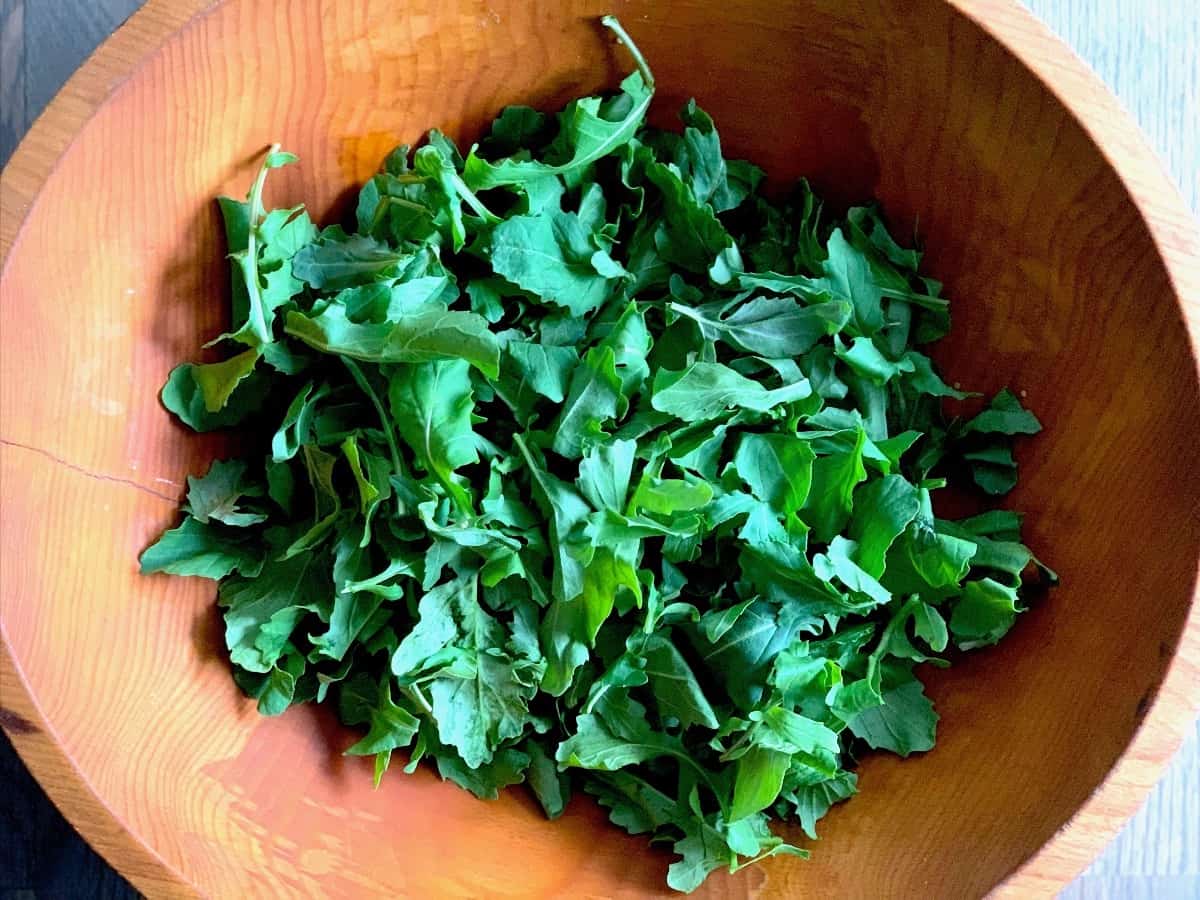 What to do with arugula? Among many other things, it’s a wonderful accompaniment to grilled lamb steaks. Good news: in addition to the arugula, we will be selling lamb steaks at the Market on Saturday.

3 to 4 tablespoons of grapeseed or sunflower oil

Sheep’s milk cheese, such as Ossau-Iraty (from Basque region of France), Pecorino Toscano, or Pecorino Romano (the Romano is fairly salty; do pay attention to overall salt if you use Romano in the dish).

Crush other garlic clove, and place into a container such as a mason jar along with a few sprigs of thyme, red wine vinegar and oil. Shake vigorously and let sit.

If grilling vegetables, slather with olive oil, salt and if desired fresh herbs like thyme.

Once grill is hot, place lamb steak on grill. I like to move it around a good bit, alternating sides and rotating the steak to create hash marks. After about 7 minutes, I bend the steak with tongs to see what the meat looks like next to the steakbone. Bending the steak reveals the interior of the steak. For medium-rare, you want pink with some red. For medium, you want pink. And for well-done, you want faint pink. With lamb, it’s at its most tender at medium-rare. If it’s rare, it’s not quite as tender, and ditto for medium and well-done.

While the steak is on the grill, add the vegetables to the grill as well. Move them around once in awhile to avoid severe charring. You want little bits of charring on the vegetables, but not complete charring.

Remove steak and vegetables from grill once they are finished cooking.

Carve leg steak against grain into portions, and place on arugula, along with grilled vegetables. It’s still more than a month before thrilled students toss those flat-topped and tasseled hats in the air, and proud parents beam (and probably shed a few tears). But dinners during graduation season are filling-up fast in our restaurants. We would hate for you to miss an opportunity to celebrate the event in the nation’s most ambitious farm-to-table restaurants. Our world revolves around Boulder County, Colorado and as the parents of four kids graduation holds extra-special meaning in our hearts. We would love to celebrate with you!